The history, types and production of gongs 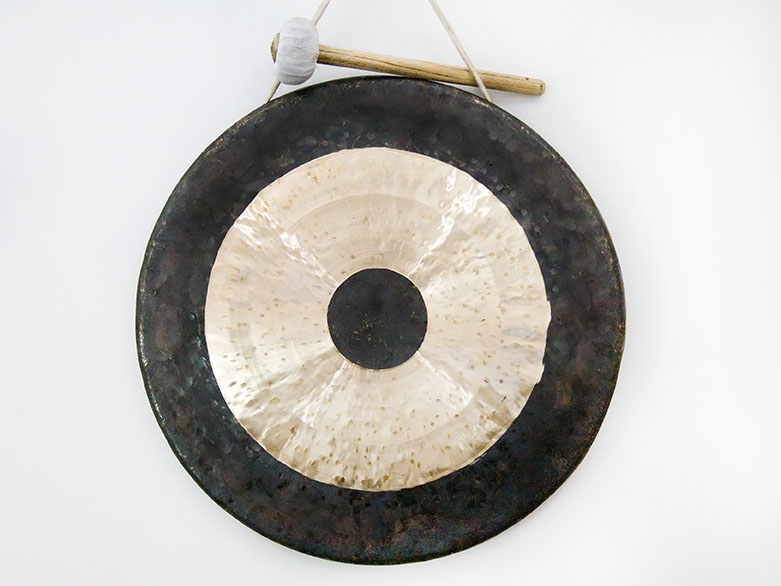 TIBETAN GONG
Gongs are some of the oldest and most important musical instruments of South-East Asia. The first recorded data about gongs comes from the II century BC. They were brought to Europe from Asia in the XVI century via the famous Silk Road. The extraordinary sound spectrum of this instrument is astonishing, emotionally stimulating and deeply relaxing. Combinations of sounds form rhythms and complex scores, which can evoke past memories. They can remind us of the feelings, scents, places, people and experiences from the past. Our mind, spirit and body take the sounds of the gong in and naturally release stress and tension to tune up our system. Listening to the sound contents lets us create our own stories through visualisations and emotional experiences.

TAM-TAMS
Tam-Tams are one of the classical Chinese gongs (Chao Lou). They are flat with small, curved rims. Apart from a clear, audible basic tone, Tam-tams can also produce a broad spectrum of ultra-sonics, so-called aliqots. Low, bass tones are also clearly audible while playing. With the use of various implements and striking techniques, it is possible to play quite high notes on these gongs. Tam-tams are powerful gongs, related to earth and male energy. Their diameters vary from 40 to 150 cm . The bigger the diameter, the more dynamic they are.

FEN-GONGS (Feng Lou) WIND GONGS
Wind gongs are flat and rimless. Fen-gongs, similarly to Tam-tams, have a very broad spectrum of sound. They are linked to female energy and, unlike Tam-tams, they are considered to be rather delicate. Their diameters vary from 30 to 100 cm.

BURMESE ‘HUMPED’ GONGS
Burmese gongs have wide rims and humps in the middle. They have one basic tone, released by striking the hump in the middle. They are often used for meditation through even, rhythmical striking. Their diameters vary from 18 to 100 cm.

OPERA GONGS
Opera gongs are small with slightly ridged surface, flat middle and wide curved rims. When struck, a whole spectrum of sounds is produced and they quickly die out. Their tone is rather sharp and therefore they are often used for special effects. Opera gongs range from 20 to 50 cm in diameter.

PAISTE GONGS – (PLANET GONGS, SYMPHONIC GONGS)
Paiste gongs are produced differently to Chinese gongs. They are made of cold-rolled metal sheets. Special sheets made of alloyed tin, copper and nickel are divided into three spheres: central, vibration area and rim. They are then ‘mirror polished’ and annealed with gas flame, which changes the metal’s hardness properties, so that it is easier to deform. After cooling down, depending on the gong’s type and size, the rim is formed by a special circular hammering technique in the direction from the rim to the centre of the instrument. This is how different tuning rounds are formed on the gong’s surface.

In order to obtain a clear sound the tuning rounds need to be uniform. The gong’s rim serves as a frame and enables slow vibration. After it has been formed, iron filings are applied to the centre of the gong to add yet another tuning round, soften the material and improve vibration quality. Eventually, the gong is tuned into a so-called ‘Master Gong’.